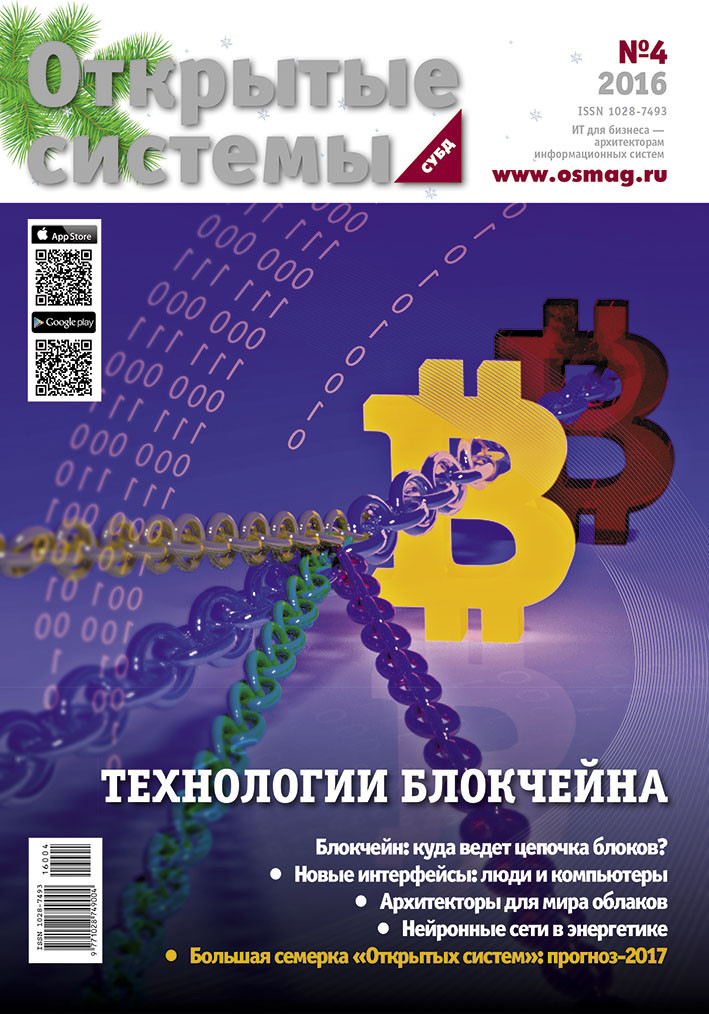 Blockchain: What Chain Exactly is it and Where does it take us?
Blockchain is one of the most talked about technologies today. Already, it is being discussed not only by IT specialists, but also by consumers, business people, and even the traditionally conservative bankers. Some associate the technology with new opportunities, others see it as a threat to existing institutions, while still others highlight the immaturity of the existing solutions.
Alexander Prokhorov (prokhorov.alexander@huawei.com), manager, Huawei; Vasiliy Burov (vasiliy.burov@gmail.com), board member, Infoculture (Moscow).

Blockchain in Operation: BlockNotary Platform
As a rule, new financial products are adopted by Russian banks with reluctance. While the potential value of, say, messenger bots could be communicated to the bankers, blockchain is being perceived with great caution so far. However, the real-world implementation of the BlockNotary platform, built upon blockchain technology, may dispel all the prejudices.
Pavel Guzhikov (pavel@bongord.com), executive, Bongo Research & Development (Moscow).

Blockchain: Hidden Pitfalls
While blockchain technology is being hyped a lot today, its benefits would not realize without taking in account the model’s objective limitations and downsides. Furthermore, the benefits would not be achieved if unsuitable methods were used to program platforms that enable blockchain support.
Alexander Solovyov (solovyov.a.g@gmail.com), independent distributed systems expert (Moscow).

Blockchain Based Fault-Tolerant Telephone Network
Despite popular beliefs, blockchain potential is not limited to cryptocurrencies: for one, blockchain based platforms enable creating secure p2p departmental telephone networks without excess costs. The operation of such a network would be affected neither by hardware component failures nor by malicious attacks.
Oleg Khovayko (oleg@emercoin.com), director of technology, EmerCoin (Moscow).

Blockchain for Everyone
After the Bitcoin cryptocurrency emerged, the blockchain notion became part of lexicon for almost everyone in the IT field. Yet the potential of blockchain is much wider than cryptocurrencies support — the technology can become a real aid in making business. For that, however, a special platform would be needed, such as Hyperledger.
Alexander Zemtsov (alexander.zemtsov@ru.ibm.com), software engineer, IBM (Moscow).

OSJ FORECAST
Innovation Accelerators: «Big Seven» Forecasts from OSJ, 2017 Revision
The year 2017 will be marked by further development of The 3rd Platform technologies and rapid adoption of new «innovation accelerators», including AI, augmented reality, and a variety of others that have emerged in the evolving IT landscape.
Natalya Dubova (osmag@osp.ru), science editor, Open Systems Journal.DBMS (Moscow).

PLATFORMS
Escala, 20 Years Later
While the market share of RISC servers is steadily decreasing, demand for the platform is still strong from customers that need business critical applications support and high availability. The latter two qualities are characteristic of Bull Escala servers, which are based on the PowerScale architecture created as far back as about 20 years ago.
Roman Gots (roman.gots@atos.net), director of business development, Atos Russia (Moscow)

IT MANAGEMENT
How to save on Software
Making business in the times of economic turbulence requires seeking ways to cut IT expenses with one of the approaches being software costs optimization.
Natalya Kalimanova (Kalimanova.Natalia@smartservicedesk.ru), SmartServiceDesk business department director, Tronic (Moscow).