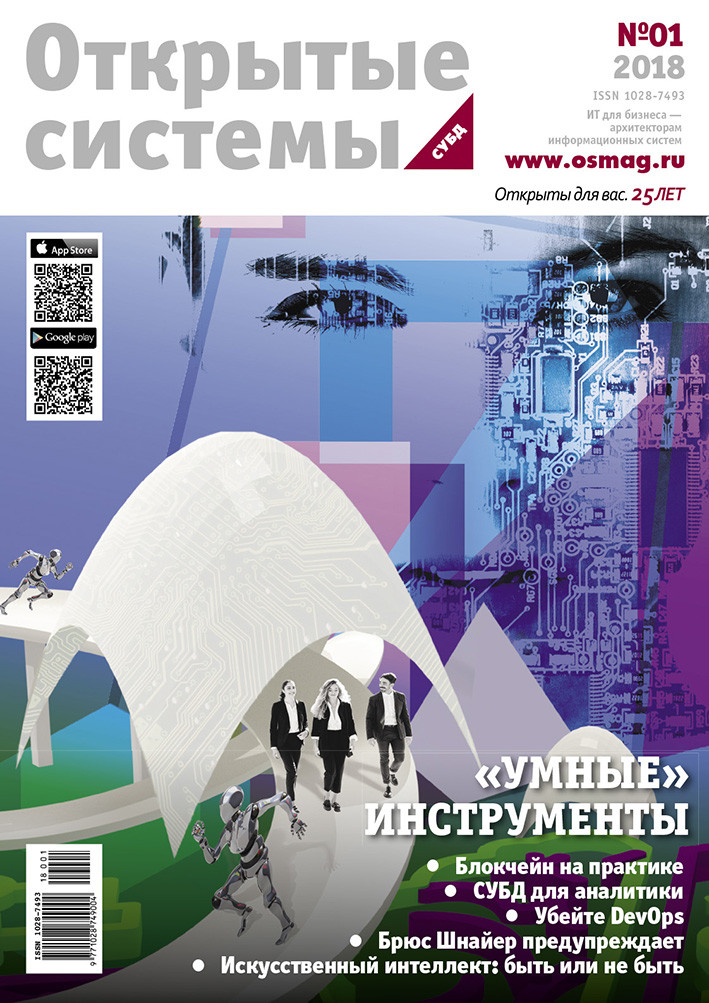 COVER FEATURES
SMART TOOLS
Software Bots
From computer programs earliest days, people have dreamed about programs that act, talk, and think like humans. Such programs could not only automate tasks that humans perform but also work with humans to solve intellectual tasks that can`t be entirely automated. What kind of platforms for bot development and use are available today?
Carlene Lebeuf (clebeuf@uvic.ca), student; Margaret-Anne Storey (mstorey@uvic.ca), professor; Alexey Zagalsky (alexeyza@uvic.ca), PhD candidate at the University of Victoria (Canada).


The Problem of Personalization: AI-Driven Analytics at Scale
Organizations have been promised the ability to tap into billions of customer interactions and demographic data, and obtain new insights that yield personalization that presents the correct product, content, or solution for users. Despite all this investment and technology, organizations continue to struggle with personalizing customer and employee interactions. Innovative approaches to using artificial intelligence and machine learning now enable accelerated personalization with fewer resources.
Seth Early (seth@earley.com), CEO, Earley Information Science.

PLATFORMS
Vector Processors vs. Hardware Accelerators
With the emergence of the NEC SX-Aurora vector processors along with TSUBASA hybrid computing systems based on the chips, the discussion on merits of traditional CPUs vs. various types of hardware accelerators such as GPUs has heated up.
Mikhail Kuzminsky (kus@free.net), senior fellow, N.D. Zelinsky Institute of Organic Chemistry (Moscow).

Toward Ubiquitous Operating Systems: A Software-Defined Perspective
In recent years, operating systems have expanded beyond traditional computing systems into the cloud, IoT devices and other emerging technologies and will soon become ubiquitous. Despite the apparent differences among existing OSs, they all have in common so-called “software-defned” capabilities — namely, resource virtualization and function programmability.
Hong Mei (meih@pku.edu.cn), Yao Guo (yaoguo@pku.edu.cn), professors, Chinese MOE Key Laboratory of High Confdence Software Technologies and in the School of Electronics Engineering and Computer Science at Peking University.

INTERNET OF THINGS
The Last Mile for IoT Privacy
The privacy problem is really one of control. If the computational system is invisible as well as extensive, it becomes hard to know what is controlling what, what is connected to what, where information is flowing, how IT is being used and what are the consequences of any given action.
Richard Chow (richard.chow@intel.com), university research manager and scientist, Intel Corp.

OPINION
Kill DevOps
The dynamic nature of the situation in which things are in constant flux, demands equally constant experimentation and learning to provide an adequate response. DevOps is part of the solution. But it’s never going to be a state that once created or emerged, remains the same. So if you think that you’ve found it, kill it and keep on experimenting.
Mark Smally, IT Management Consultant at Smalley.IT.

Will Machines Ever Become Intelligent?
IT may appear as if machines would get smarter than people in a really short time period, yet this ‘short period’ has actually lasted for over half a century now, causing doubts as to the very possibility of this to happen.
Vlad Zhigalov (zhigalov@gmail.com), Chief Engineer, National Research University of Electronic Technology (Moscow).

OS ACADEMY
Where to Tell Traveling Salesman to Get Off?
The problem of selecting the most efficient route, essential to any logistics company, can still be solved only using heuristic algorithms helping to construct an optimum path while cutting transportation services costs. Which of the existing heuristic methods should be used based on specific constraints?
Yekaterina Beresneva (eberesneva@hse.ru), Mariya Gordenko (mgordenko@hse.ru), professors, Higher School of Economics, National Research University (Moscow).

Integration of Conference Publications in Open Information Resources
This article discusses approaches to the solution of the problem of rapid dissemination of research results through open information resources. The proposed solution aims to optimize generating and processing metadata for scientific publications; minimize errors caused by repeated manual entry of duplicate data; and automate preparing and inputting metadata in the information resources that do not support an automated metadata exchange technology. the solution was developed and implemented at ITMO University as part of the Internet and Modern Society international scientific conference.
Irina Mbogo (irina.mbogo@gmail.com), Senior Lecturer; Dmitry Prokudin (hogben.young@gmail.com), Assistant Professor; Andrei Chugunov (chugunov@egov-center.ru), Director of eGovernment Center, ITMO University (Saint-Petersburg).