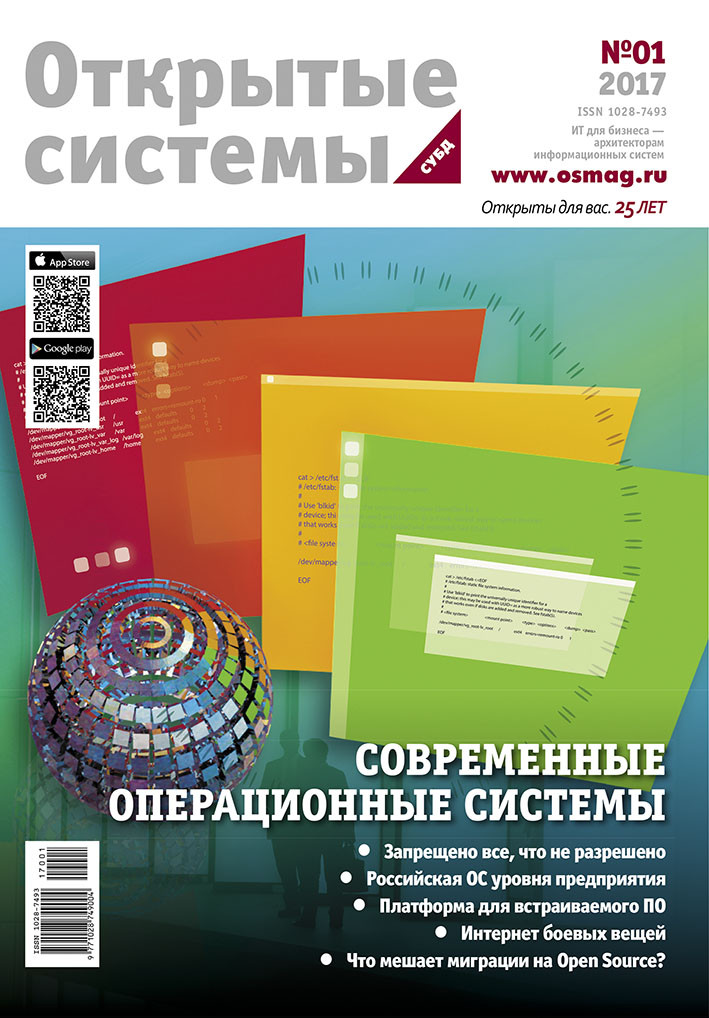 COVER FEATURES
TRUSTED OPERATING SYSTEMS
KasperskyOS: Everything is Forbidden Which is not Allowed
In 2016, Kaspersky Lab announced the availability of its own operating system aimed at securing the operation of network devices by protecting them not only from external threats but also from each other.
Andrey Nikishin (Andrey.nikishin@kaspersky.com), Head of Department for Technology Projects Development, Kaspersky Lab (Moscow).

MAKS: A Real-Time Embedded Software Platform
AstroSoft has developed a real time operating system which combines not only basic functions expected from this type of a platform but also a number of differentiating features allowing to speed up embedded software development for devices based on microcontrollers.
Alexander Kucherov (alexander.kucherov@astrosoft.ru), MAKS RTOS Project Manager, AstroSoft (St. Petersburg).

Mandatory Access Control in Operating Systems and Databases
While there is no mandatory access control in Linux, its use for various applications requiring privacy protection creates the need to secure the open-source OS working in conjunction with databases. In those settings, ensuring security requires a cross-platform solution.
Valery Popov (v.popov@postgrespro.ru), Head of IT Security and Certification Group, Postgres Professional (Moscow).

PLATFORMS
The Chinese CPU and Supercomputer Way
By the end of 2016, Western countries had to recognize that peak performance of both supercomputers and CPUs from China is greater than that of similar U.S. systems, with Chinese engineers having proved they are able to surpass the West in high-performance computing.
Mikhail Kuzminsky (kus@free.net), research fellow, N.D. Zelinsky Institute of Organic Chemistry (Moscow).

SOFTWARE ENGINEERING
Building Critical Applications Using Microservices
With system software bugs to be inevitably used for attacks, mission critical applications must not be dependent on the correctness of low-level code. The use of microservices and protected memory areas such as Intel Software Guard Extension minimizes trusted computing base and ensures the necessary application reliability without trade-offs.
Christof Fetzer (christof.fetzer@tu-dresden.de), professor of computer science, Technische Universitat Dresden.

INTERNET OF THINGS
The Internet of Battle Things
On the battlefields of the future, multitudes of intelligent things will be communicating, acting, and collaborating with one another and with human warfighters. This will demand major advances in science and technology.
Alexander Kott, Ananthram Swami, Bruce J. West, ({alexander.kott1.civ, ananthram.swami.civ, bruce.j.west.civ @mail.mil}), research scientists, US Army Research Laboratory.

EXPERIENCE
Open Source Software Adoption Lessons from Linux in Munich
Over 10 years, the city of Munich migrated 15,000 PCs from Windows to the open source Linux operating system. Based on this case, the authors propose recommendations for evaluating and calculating the risks of open source software adoption.
Mario Silic (mario.silic@unisg.ch), postdoctoral researcher at Institute of Information Management, University of St. Gallen, Switzerland; Andrea Back (andrea.back@unisg.ch), full professor of management and information systems, University of St. Gallen, Switzerland.

THE WORLD
Teaching programming during IT revolutions
In IT there is a permanent revolution: technologies, tools change, fundamentally new solutions appear. How in these conditions to organize the learning process, to prepare competent programmers, based on fundamental knowledge in the implementation of applied developments?
Victor Ivannikov

It All Comes Down to Memory
While offering high performance and scalability not achievable with traditional solutions, the in-memory storage and processing technology developed by GridGain Systems is capable of much more than that due to the diversity of workloads and data it is capable of handling.
Natalya Dubova (osmag@osp.ru), science editor, Open Systems Journal.DBMS (Moscow).